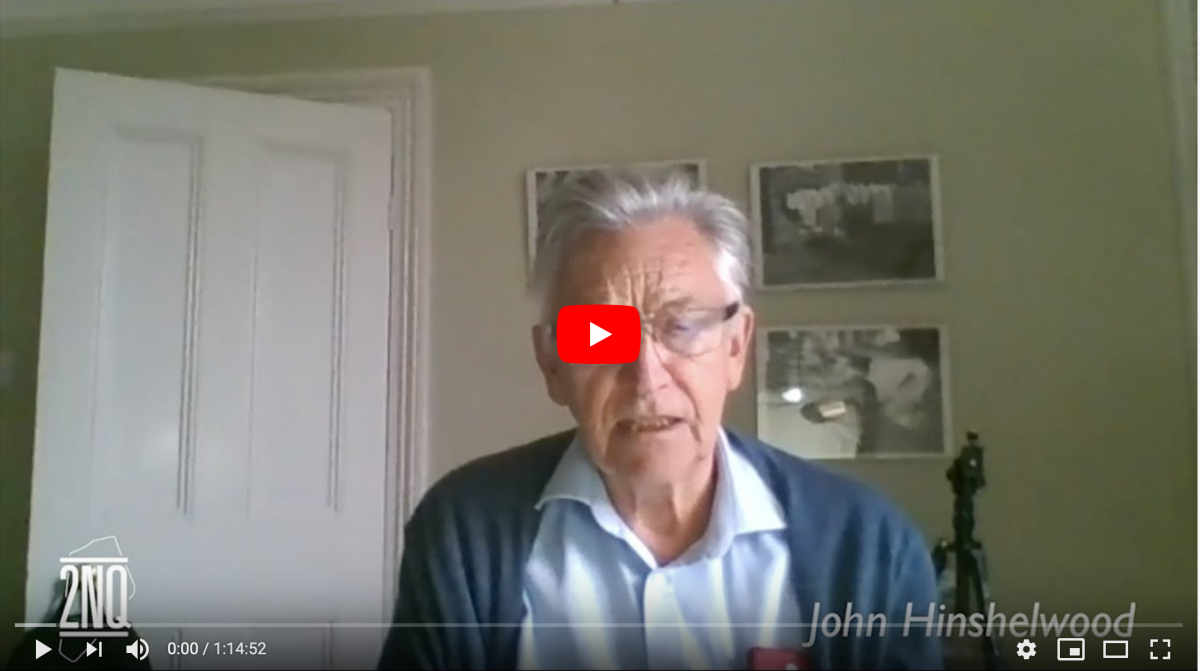 John’s research is also referenced in this post by the Bruce Castle Museum team.

Finsbury Park celebrated its 150th anniversary in 2019. In this post we’re going to look at the creation of the park, what has gone on there over the last 150 years and the birthday celebrations. To start though, local historian and member of Hornsey Historical Society John Hinshelwood, is going to tell us about what was there before the park: a place where people would go to meet and enjoy themselves as far back as the 17th century!

Before its establishment in 1869, the area in which Finsbury Park is situated was predominately fields and woods surrounded by the villages and hamlets of Stroud Green, Crouch End and Newington Green. The north-western part of the park was woodlands called Brown’s and then Hornsey Wood, and from the early 1600s we can find reference to a large manor house next to the woods, called Copt Hall.

Copt Hall was described, in 1649, following the Act of Parliament abolishing Cathedrals and Collegiate Churches as follows:

“All that Manor house or farm Comonlie called Copt Hall, consist of a Hall, a Parlor, a Kitchinge, a Celler & two chambers a Hay house a Stable and garden with a wood. One other little Brick house consisting of a hall A Kitchin a Butterir five chambers and a barn.”

It was held by Thomas Allen Esq and John Aldridge by lease under the Reverend Thomas Cartwright. Licensing records from the same time show that John Dellow was the keeper of the ale house called the Horns beside the Copt Hall, the ale house became known later as Hornsey House. 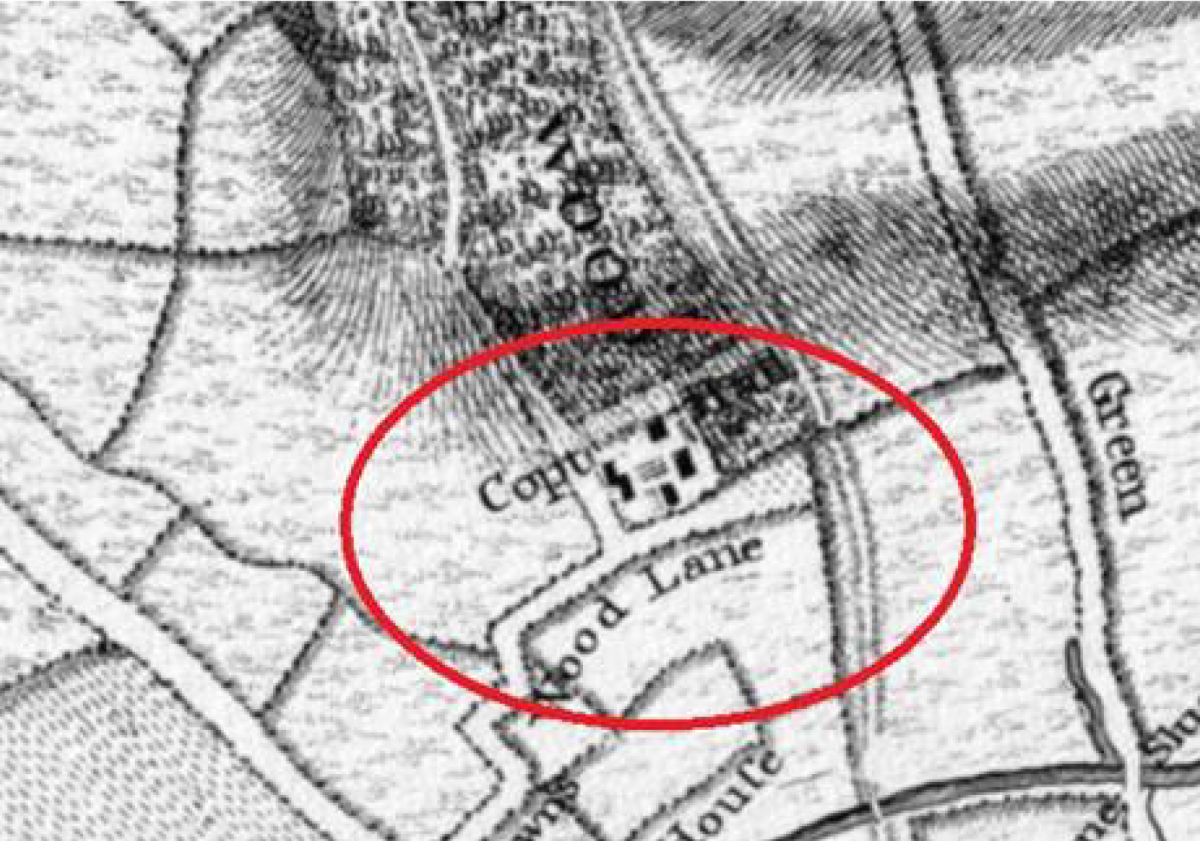 Detail from John Roques’ map 10 Miles round London, 1746 showing Copts Hall at the southern edge of Brown’s Wood from the Layers of London website.

In the 1774 publication of The ambulator; or, The stranger's companion in a tour round London, collected by a gentleman, it was described as “a coppice of trees called Hornsey Wood at the entrance of which is a public house to which numbers of persons resort from the metropolis. This house being situated on top of an eminence affords a delightful prospect of the country.” 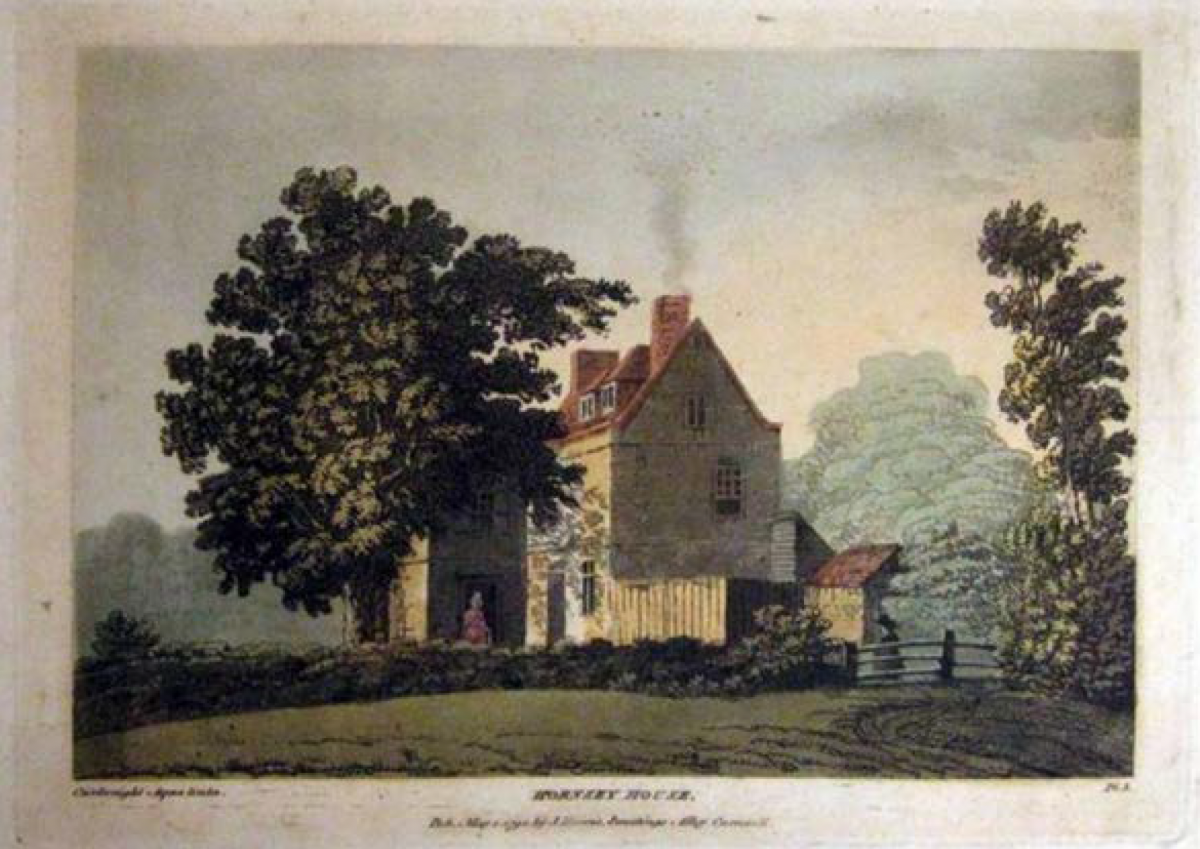 © Bruce Castle Museum (Haringey Archive and Museum Service) This view of Hornsey House, was by J Cartwight, published by John Harris in 1794, and shows how the House looked before the building was extended, some of the trees were felled, the gardens were enlarged, and a lake was formed.

The history of the house before it was enlarged was recalled in the early 19th century by the radical publisher and satirist, William Hone (who lived in his later years near Bruce Castle):

“The old Hornsey-wood house well became its situation; it was embowered, and seemed a part of the wood. Two sisters, Mrs Lloyd and Mrs Collier, (1765) kept the house; they were ancient women; large in size, and usually sat before their door, on a seat fixed between two venerable oaks, wherein swarms of bees hived themselves. Here the venerable and cheerful dames tasted many a refreshing cup, with their good-natured customers, and told tales of by-gone days, till, in very old age, one of them passed to her grave, and the other of them followed in a few months. Each died regretted by the frequenters of the rural dwelling, which was soon afterwards pulled down, and the oak trees felled, to make room for the present roomy and more fashionable building. To those who were acquainted with it in its former rusticity, when it was an unassuming “calm retreat”, it is indeed an altered spot. To produce the alteration, a sum of ten thousand pounds was expended by the present proprietor, (John Berkenhead) and Hornsey-wood Tavern is now a well frequented house. The pleasantness of its situation is a great attraction in fine weather.” 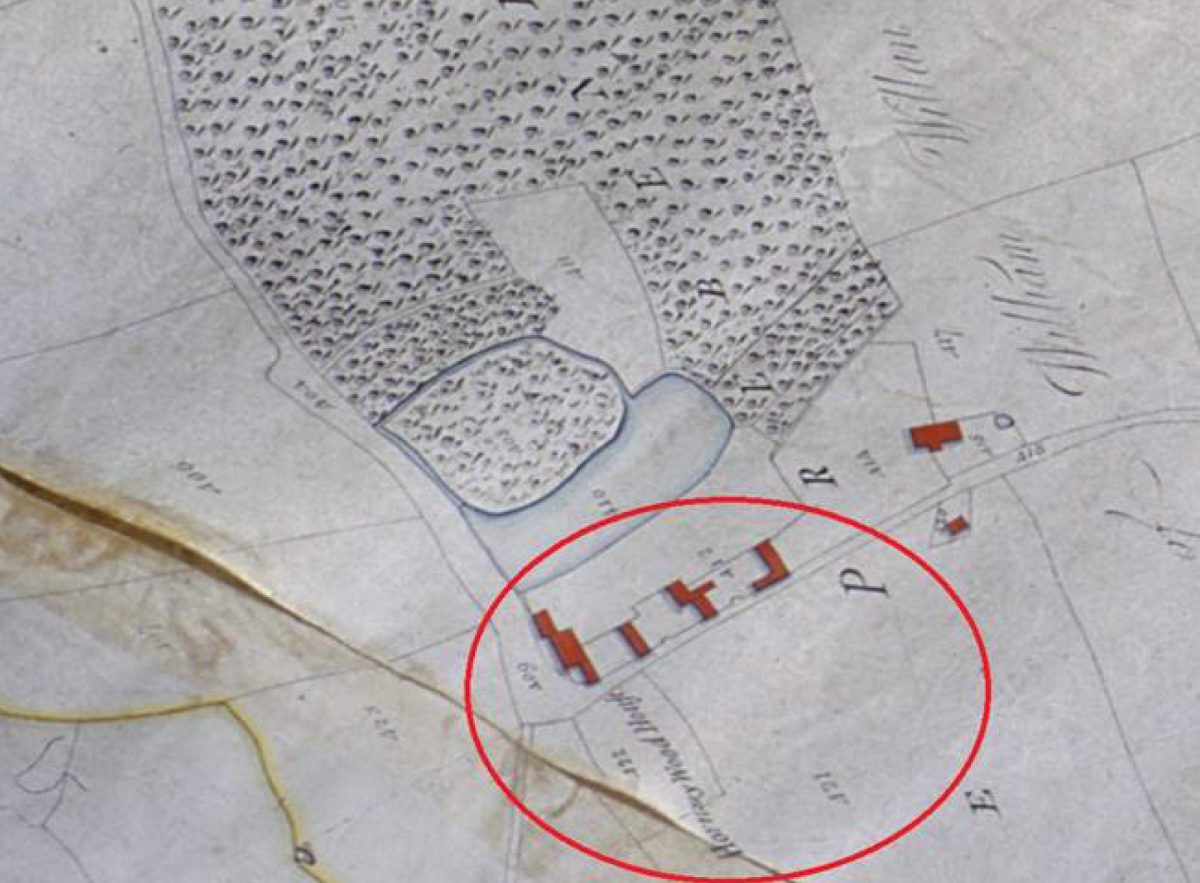 By 1816 the House had changed its name to Hornsey Wood Tavern. A viewing platform was added to the roof and a sign showing its new name. 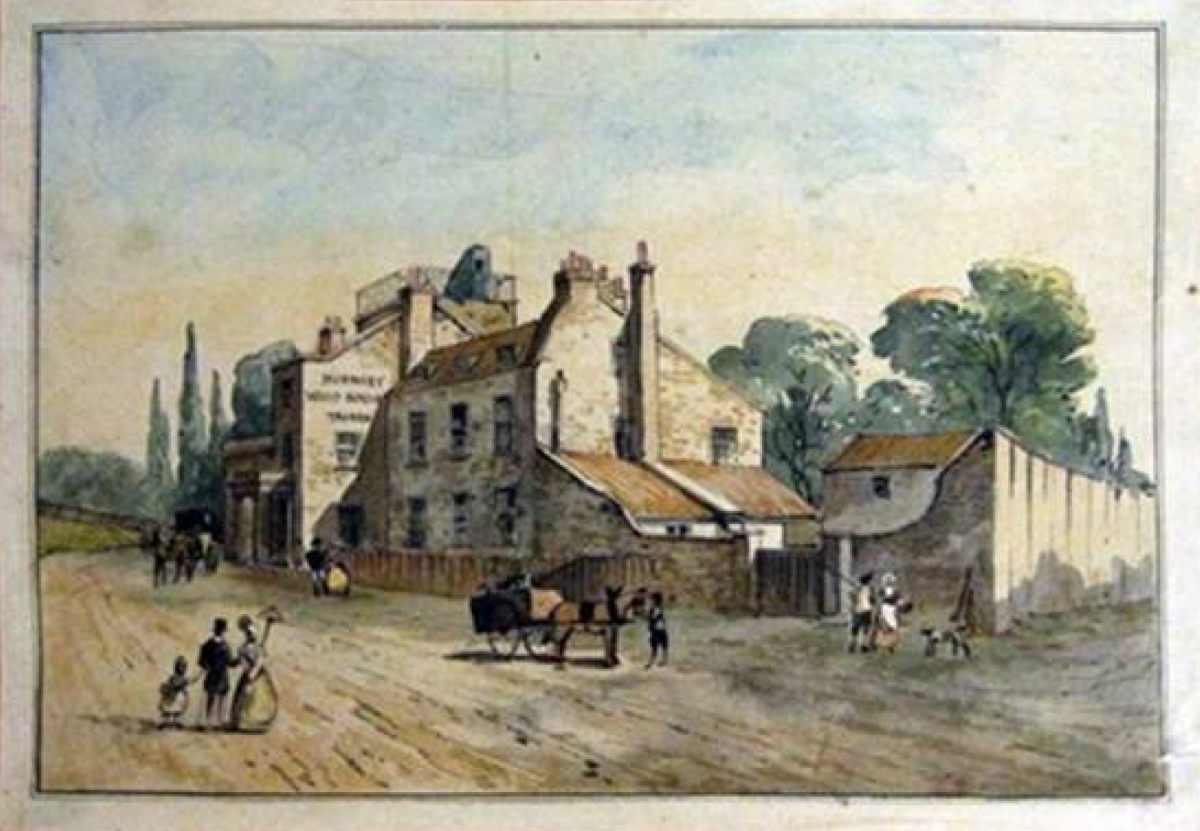 Thomas Hosmer Shepherd (1792 – 1864) painted the view of the House above. From collections at Bruce Castle Museum & Archive. This is likely to be an accurate representation as Shepherd was a well-regarded architectural artist working for Frederick Crace, who employed him to paint old London buildings.

The Rev. John Godwin Hale, vicar of Tottenham 1862-70, noted how Hornsey Wood had become a major sporting venue as well as a tavern and tea garden. It attracted a wide clientele including families, people holding dinner parties, anglers – who found the lake better stocked than the New River – and aristocratic pigeon-shooters. Hornsey Wood was also renowned for the duels that were fought there.

Thomas Dugdale's explains in his work The Curiosities of Great Britain or England Delineated, published around 1850,

“At the entrance to Brown’s Wood, improperly called Hornsey Wood is situated Copt Hall, or, as it is called Hornsey Wood House, long celebrated as the resort of company during the summer for recreation and refreshment: and being on the summitt of an eminence, affords a delightful prospect of the neighboring country. At present it is nearly pulled down, but whether it will be rebuilt for its late purpose is uncertain.” 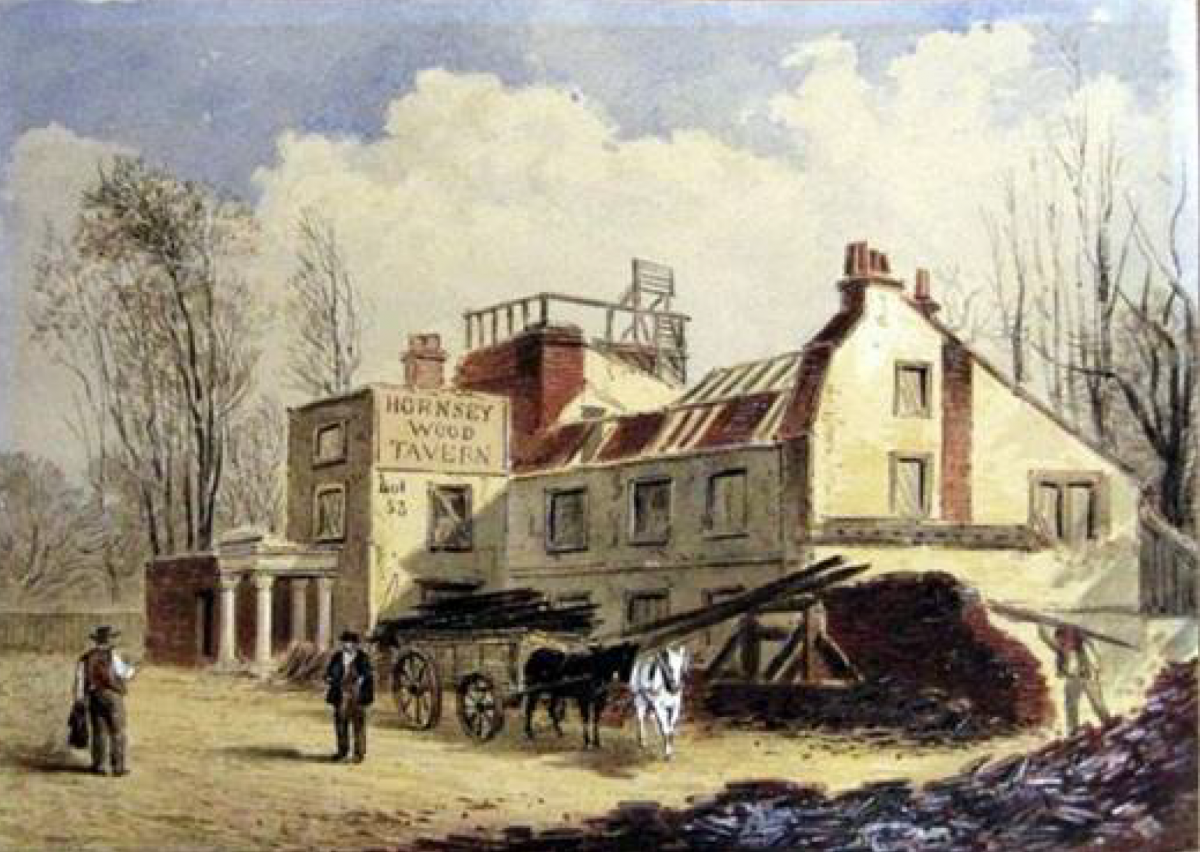 In 1866 the Hornsey Wood Tavern was demolished, and the tea gardens, lake and recreational facilities were replaced by Finsbury Park.

From the mid-19th century, a large, public space for the people living in the Parliamentary Constituency of Finsbury was petitioned for. Finsbury at that time was one of the most heavily populated areas of London with very little open space accessible to the public. In line with the Victorian encouragement for fresh air and access to the outdoors, and after much petitioning, the Finsbury Park Act of 1857 was passed and the search for a suitable location began. Once the area described above was deemed suitable and purchased, the development of the park started in 1866. It was designed by Frederick Manable, Superintending Architect to the Metropolitan Board of Works (MBW) and the landscape designer Alexander McKenzie, and in August 1869 Finsbury Park, London’s second municipal park (Victoria Park being the first), was opened to the public. 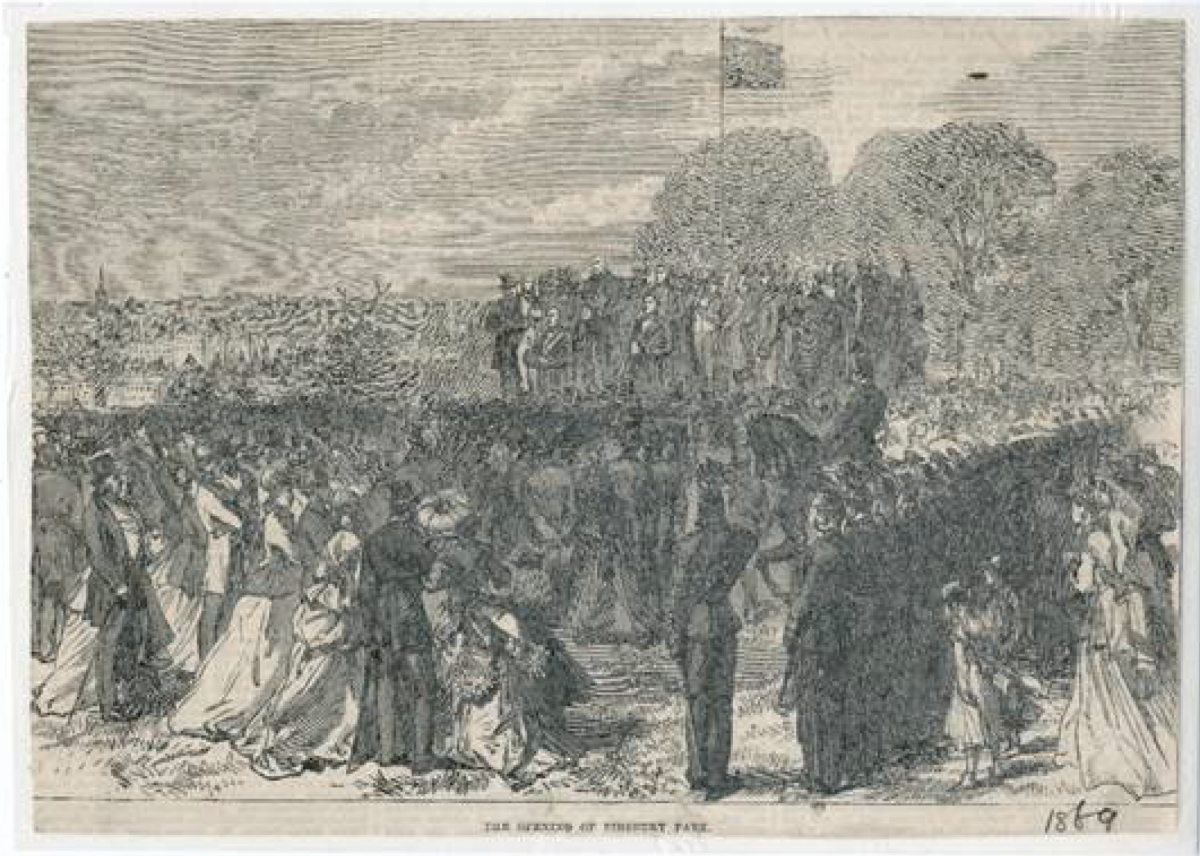 The Opening of Finsbury Park, taken from Illustrated London News, 14 August 1869. From the collections at Bruce Castle Museum & Archive. 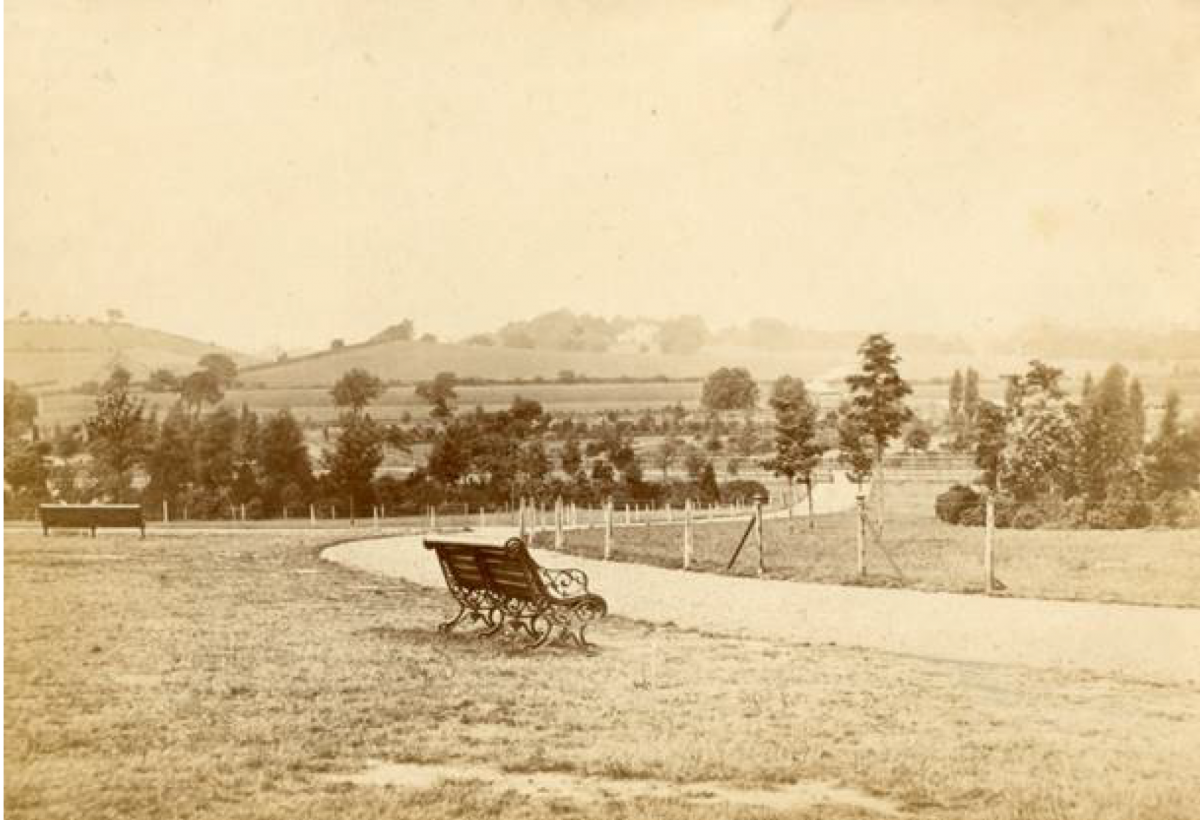 The image above is the earliest image we have of Finsbury Park c.1870 in our collections at Bruce Castle. This view is looking north. In the distance to the left is the end of 'The Hogs Back' ridge of hills (what is now part of Ridge Road/ Mountview Road, going towards Ferme Park Road), and Harringay House can be seen in the middle distance on the hill amongst the trees.

Development of the park continued after its opening, and new features, such as the gates and railings in 1873 and the bandstand, chrysanthemum house, bowling green and cricket pavilion were also added. 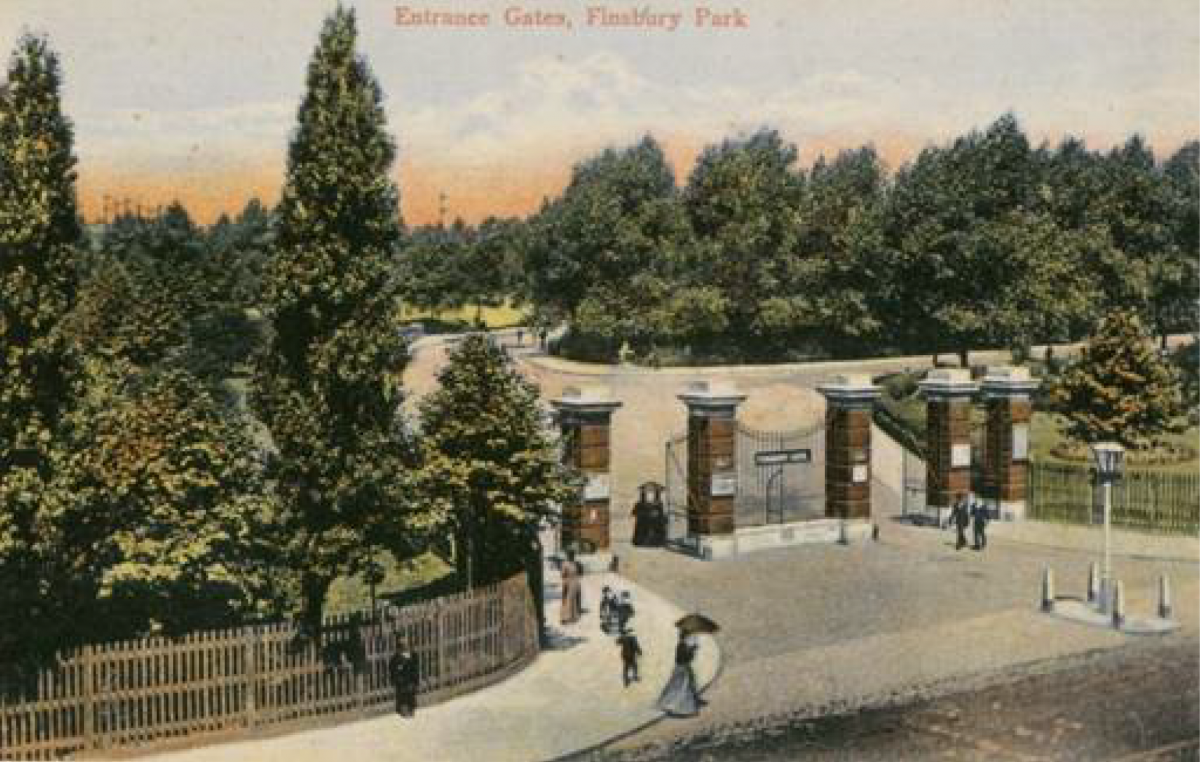 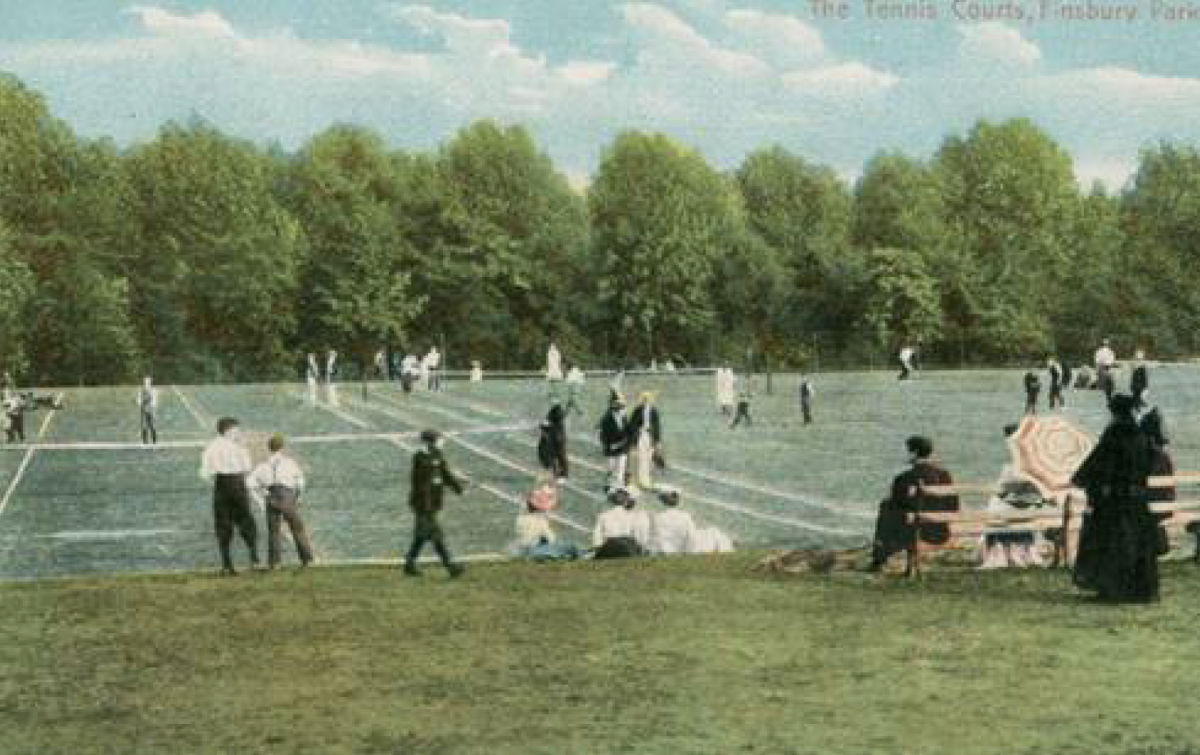 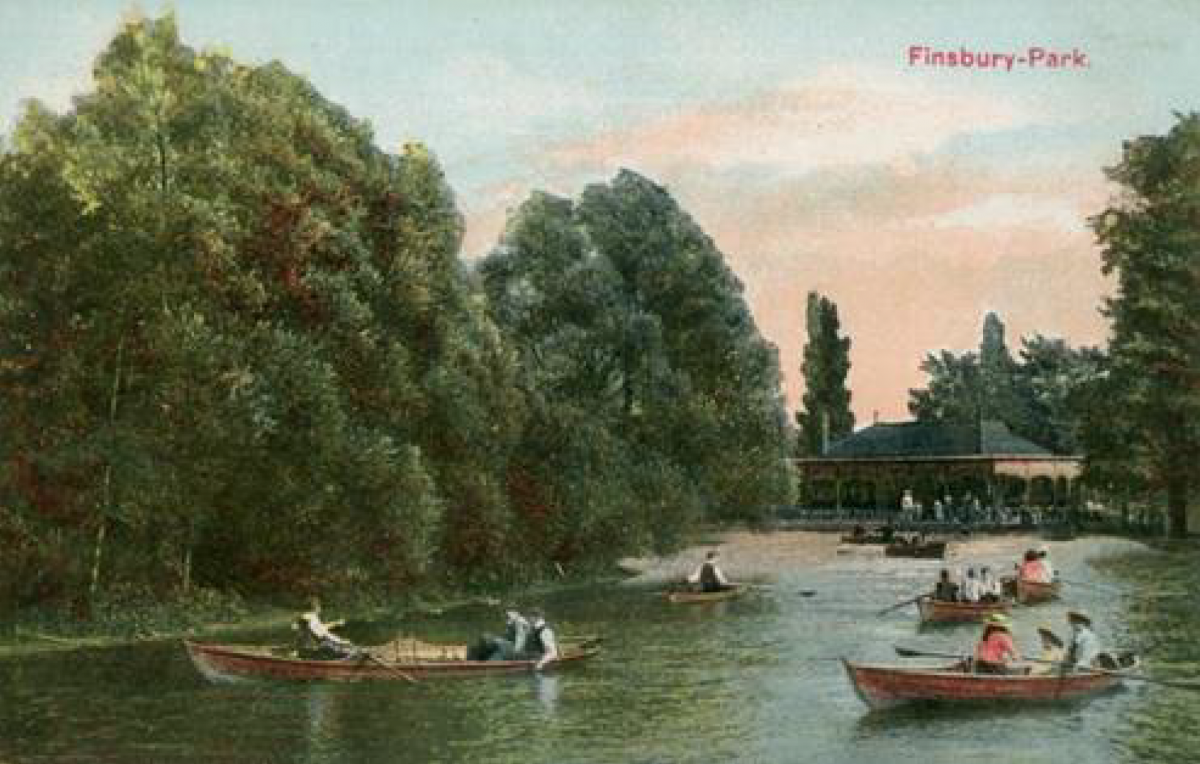 In the 20th century the park’s facilities continued to be developed and the open space was frequented by local residents and Londoners alike for recreation – and some more unusual activities. Before the First World War, the Suffragettes used the park for their rallies to campaign for votes for women, and during the First World War the park was known as a location for pacifist meetings.

A Hornsey borough guide from 1939 describes Finsbury Park as having “a boating lake, a long range of formal gardens, an athletic track, and a field for football practice. Near the Hornsey Gate are walks flanked by rhododendrons and azaleas and near the Manor Gate is a greenhouse, which is open most of the year and is especially attractive in chrysanthemum time.”

During the Second World War, the park took on an altogether different look, being initially used as military training grounds, then hosting anti-aircraft guns and barrage balloons and as a location for a large bomb shelter for local residents. As open space was a resource to be utilised for the war effort, we know that allotments were also set up in the park for people to grow their own vegetables in, as this Hornsey Journal article (below) from 11 April 1940 explains. 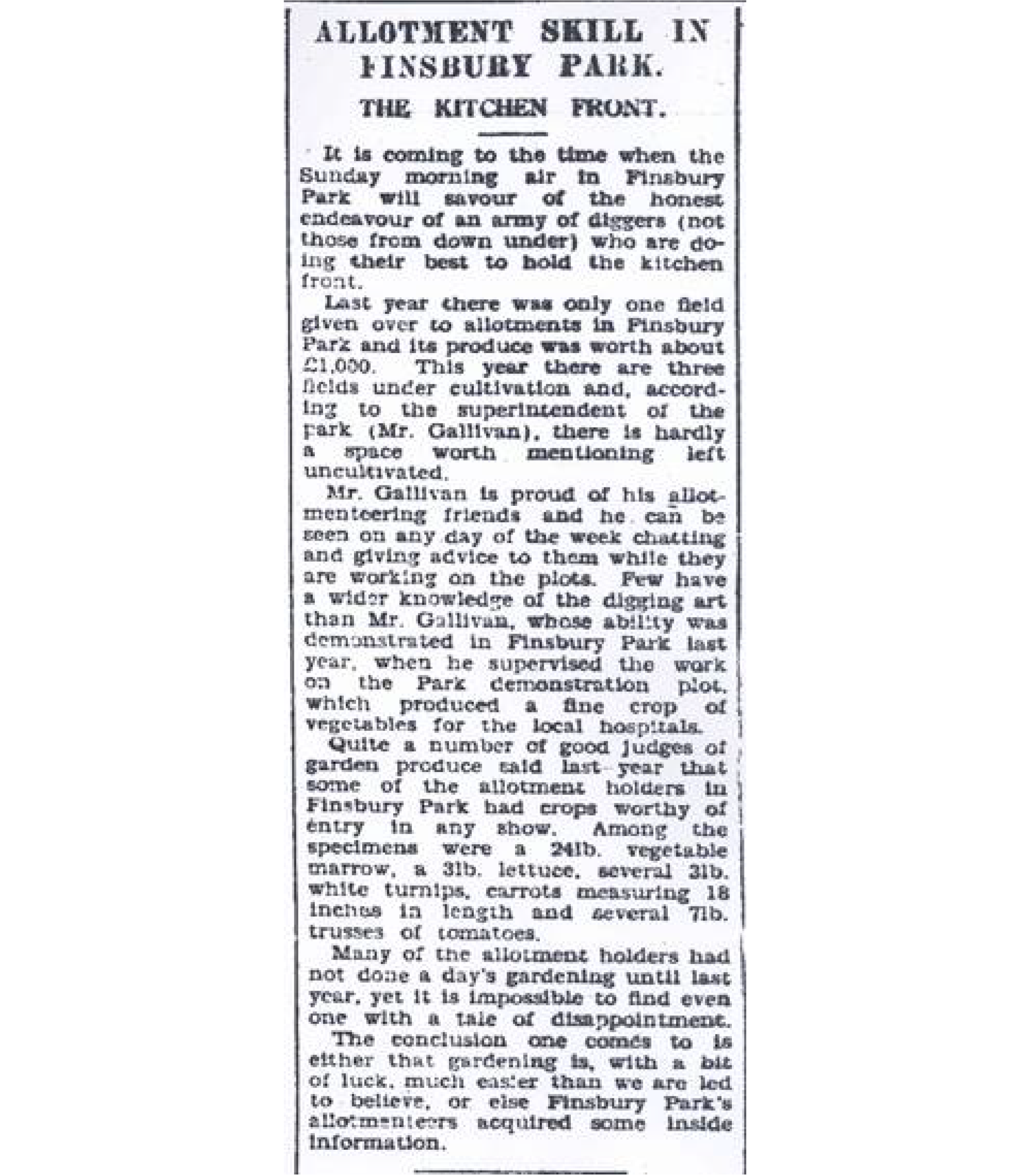 In the late 20th century, the park became known as a venue for events and music and cultural festivals and today is still a central part of the leisure activities of its three neighbouring boroughs – Haringey, Hackney and Islington.

2019 was the 150th anniversary of Finsbury Park. The Friends of Finsbury Park started this special year at Bruce Castle’s annual Local History Fair in February 2019, with a talk showcasing what the year had in store for the celebrations. The year also saw a programme of community arts and cultural events held to commemorate its extraordinary history, supported by National Lottery Heritage Fund and Haringey Council and organised by 2NQ.

Events included #Everything150, a contemporary archaeology project in partnership with the Museum of London, a People’s Park photographic exhibition and a series of outdoor People’s Platform performances by local musicians.

The programme of events has continued into 2020 with a series of Heritage Talks in Finsbury Park Café (and, latterly, online), Adventure Learning sessions run by Hugh Dames, engaging local school children in the park's history, and natural environment, and the Safe Space art workshops for older people and carers in the Finsbury Park area. 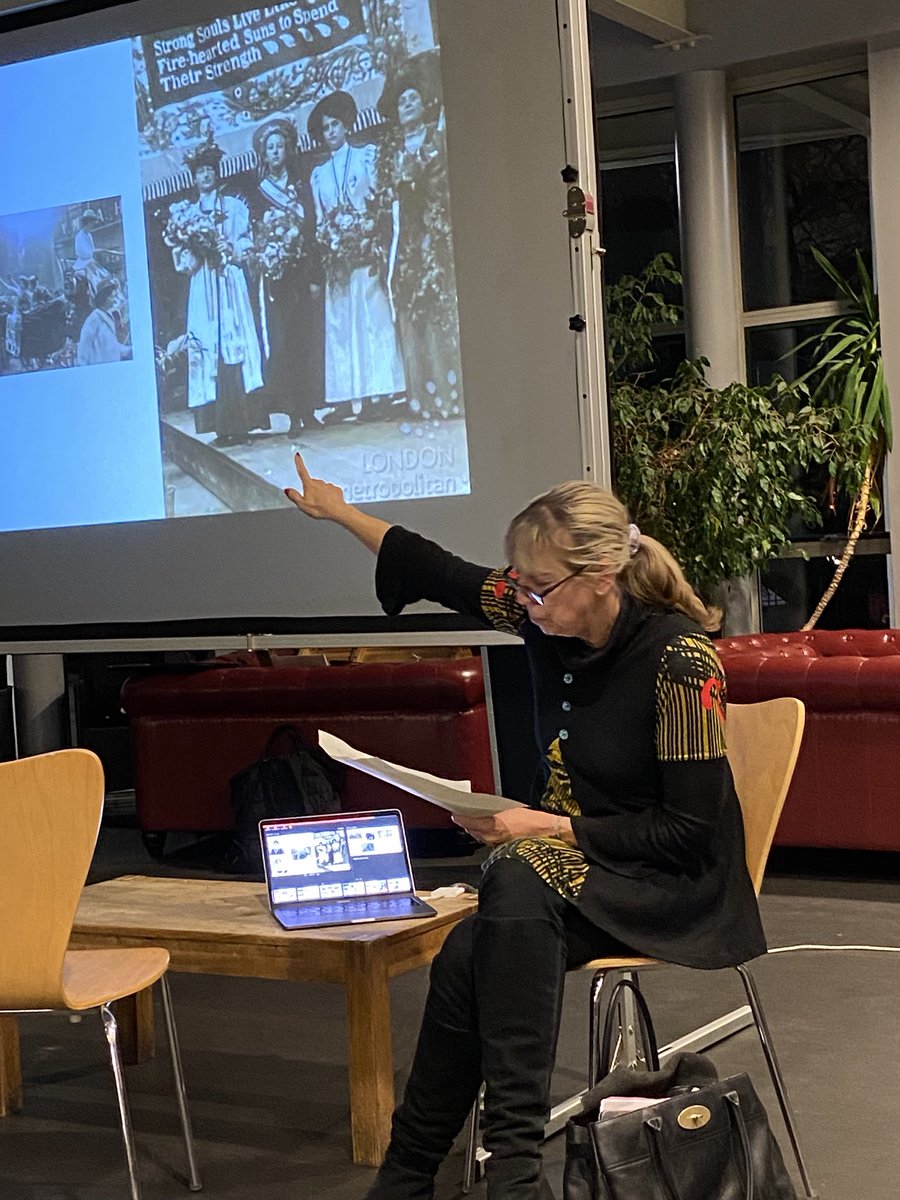 Professor Krista Cowman from University of Lincolnshire, talking about Suffragettes as part of the Heritage Talks series, March 2020. ©2NQ

If you’re interested to learn more about the history of the park we’d suggest Hugh Hayes’ A Park for Finsbury, a new edition re-published and brought up-to-date by The Friends of Finsbury Park with support from Haringey Council. The Friends are the support group for the park, and have been involved in many heritage and community projects over the years focussing on the park and it restoration.

So here’s to the next 150 years of Finsbury Park, and while you’re taking your exercise in the coming weeks (keeping social distances!), have a think about the parks and open spaces you’re in - there’s sure to be something interesting about their history.